Jaya is a passionate advocate for engaging business with community through technology to improve peoples lives, and was honoured with an MBE in the 2014 Queen's birthday honours list 'For services to the Creative Digital Industries and the community in Bristol'.

Cofounding digital agency Nameless in 1999, it soon became one of the leading creative digital agencies in Bristol, garnering clients that include such icons as Orange, Dyson, HSBC, the NHS, Channel 4, British Airways, RIBA, the RFU, Cancer Research, Sony Playstation and Warner Bros, topped by the Home Office and Food Standards Agency.

In past years, she served on the Board of Bristol's Watershed Media Centre, Great Western Ventures and other tech initiatives.

Jaya chaired the “Mayor for Bristol” campaign that achieved the only Yes vote in the country for democratically elected mayors in May 2012.  She also chaired a local democracy organization, Bristol Manifesto, aimed at ensuring that the disengaged are re-engaged and empowered.

Outside local activities, as a member of OFCOM's Consumer Panel and their Advisory Committee on Older and Disabled People her reach extends nationwide.
Jaya is also a Research Fellow with the University of Northampton Business School looking at corporate democracy and the gamification of social investments, and is also a Business Fellow with the Unversity of the West of England focusing on big data around the Modern Slavery Act.
Jaya regularly speaks on leadership, digital/open data issues and matters of social justice for: Common Purpose, schools, Universities and membership organisations (West of England Initiative, Business in the Community, Digital Catapult, Sustainable Travel Awards).

Stephen is the Welsh Government’s Anti-Slavery Co-ordinator. Prior to this appointment  Stephen worked for the London Organising Committee for the Olympic and Paralympic Games in the Security and Resilience Directorate where his roles included the Manager for Games Security Co-ordination Centre, Lead Venue Security Planner and Project Manager. In his previous career he has worked across the UK and overseas in roles which include Deputy Director for the Central Operations and Performance Directorate for the UK Border Agency, Assistant Director with the Police Standards Unit and Violent Crime Unit at the Home Office, Head of Equalities & Community Safety with Cardiff Council and an Area Commander in the Police Service.
In the role of the Anti-Slavery Co-ordinator, Stephen leads and co-ordinates the multi-agency response to tackle slavery which aims to make Wales hostile to slavery and provide the best possible support for survivors. He is a member of the Wales Anti-Slavery Leadership Group, Inter-Departmental Ministerial Group for Modern Slavery, UK Threat Group for Modern Slavery, Home Office Modern Slavery Strategic Implementation Group, All Wales Portal Group, Modern Slavery Helpline Advisory Board, Board Member Crimestoppers Cymru and a member of a number of other key UK and National Groups.

Other responsibilities include leading on Serious Organised Crime issues and being part of the cadre to work within the Emergency Co-ordination Centre for Wales. For the Wales NATO Summit 2014 and UEFA Champions League Cup Final Cardiff 2017, Stephen was the Government Silver Command Liaison Officer. Stephen’s academic qualifications include a Masters Degree in Business Administration, Masters Degree in Management, Post Graduate Certificate in Leadership with Merit, Post Graduate Certificate in Education (Post Compulsory) and a ‘PRINCE2’ qualified Project Manager. He is the ‘Subject Matter Expert’ Independent External Qualification Verifier for the Strategic Multi-Agency Resilience Award and Certificate (Wales Gold) at Master’s Degree Level. He is also a Visiting Lecturer at a number of academic institutions including Swansea University and South Wales University. In 2016 Stephen received the Welsh Government Award for Leadership. Whilst serving in the Police Service, Stephen received a number of commendations for leadership and bravery. Stephen is proud to be an Ambassador for the White Ribbon Campaign which promotes men taking a stand to end violence against women.

Sue has worked for the Welsh Government since 2006 as Special Projects Manager in Value Wales. Value Wales shapes procurement policy, monitors good practice, supports and advises professionals and develops the public procurement profession in Wales. Each year the public sector in Wales spends almost £6 billion. As part of the Commercial Directorate of the Welsh Government, Value Wales works to ensure that that this is spent efficiently and achieves value for money, whilst also maximising the wider social and economic benefits for the citizens of Wales.
Sue’s most recent project has been establishing the Code of Practice on Ethical Employment in Supply Chains, places an expectation on all organisations in receipt of public money that they ensure that workers throughout supply chains are employed legally, ethically and fairly. The Code has 12 commitments, on subjects ranging from tackling modern slavery, blacklisting and unfair employment practices, and paying the living wage.
Prior to developing the Code of Practice Sue’s most significant project has been implementing the Supplier Qualification Information Database (SQuID), which has standardised and simplified the supplier selection process across Wales. More recently she has led the work on developing a Joint Bidding Guide to promote consortia and collaboration through public procurement. Before joining the Welsh Government she worked on procurement policy for the Office of Government Commerce, and carried out a secondment at Suffolk County Council. Sue joined the civil service in 2000 after a short period as a research scientist.

Justine joined Unseen on 1 May 2016 following a 28.5 year career in the civil service. During that time she held a variety of operational and policy posts working across a number of UK Government departments. For the last five years of her civil service career, Justine was the modern slavery senior policy adviser in the Home Office and led on development of the Modern Slavery Act, including the transparency in supply chains provision and business guidance, working closely with Ministers, businesses and international colleagues. Since joining Unseen Justine has been called upon to provide her insight and experience on the issue of modern slavery to media, law enforcement agencies, safeguarding professionals and business. She has specifically provided support to a number of key businesses on developing their response to supply chain transparency and is highly regarded in this field.

She has joined Unseen to lead the development of the enhanced modern slavery helpline and resource centre and Unseen’s work with businesses on supply chain transparency, including the central registry for business transparency statements, Tiscreport. Justine seeks to use her experience and knowledge of working with UK Ministers to influence other Governments internationally to take action to address modern slavery and, in particular, business supply chain issues.

After a 20 year career in the Civil Service with the Home Office, HM Customs and Excise and HM Revenue and Customs, Paul joined the Co-op in 2016 as Group Policy Director. Paul is responsible for establishing and delivering the Co-op’s position on a range of ethical and sustainability issues leading campaigns on those that matter most to the Co-op and its members.
While in Government Paul operated in a number of strategic, operations and transformation roles, the last ten years as a Director. From 2000 he led the development and implementation of strategies to tackle multi-billion losses from a range of organised criminal attacks on the UKL Exchequer including cigarette smuggling, VAT fraud, alcohol fraud, tobacco smuggling and road fuels fraud. From 2008, as Operations Director, he was accountable for the delivery of tax credits and Child benefit leading 6,500 people in HMRC.

Emma studied BA Business Studies and Social Sciences at Nottingham Trent University and completed the CIPS Professional Diploma in 2003. Emma developed an interest in procurement after starting her career in business process re-engineering and project management. She has over 7 years experience as a procurement practitioner and was Purchase to Pay Manager for Experian PLC prior to joining CIPS, where she managed the implementation of a suite of end-to-end e-procurement tools and their surrounding processes. Emma is Representation Manager at CIPS and is responsible researching and highlighting current issues affecting procurement professional, promoting the profession and maintaining up-to-date knowledge integrity throughout all of CIPS products and services. Her work with TISCreport has been critical to our understanding of best practice within procurement and how we can use it as a force for good. 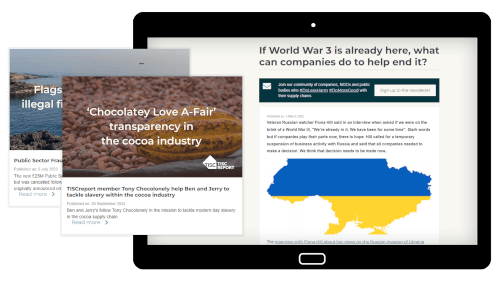